On the 7th, I whisked Spencer off to visit his cousins in Idaho and Utah.  We got to fly again this year, and Spencer LOVED it.  We had to get up really early 4am to be to the airport in time for our 6:15am flight.  Spencer was awake from the time we got him up until I got him in the car in Utah.  He promptly passed out on the drive to my Grandma’s house.

We drove up to Idaho to stay with Adam’s sister and see the other siblings that passed through that way in the few days were there.  Spencer was kind of ornery, but he did have a cold.  Apparently he caught it on the plane (and I got it a couple days later).  While we were there, we play games, went ice blocking and supported an uncle finishing a marathon. 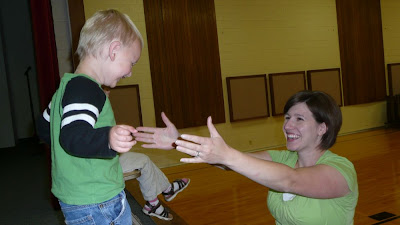 This is Spencer being Spencer.  The world’s most cautious little boy.  He doesn’t like to do lots of things that other kids his age do.  He was VERY hesitant to jump into my arms.  Basically, he wouldn’t do it unless my hands were around his waist.  He loved it and wanted to do it a few times after he decided it was okay.

He also refused to ice block with me holding his hands running with him, but he would go if he was sitting in my lap.  The video is the only time we fell in the MANY times we went down the hill.

After our time in Idaho, we went back to my Grandma’s house (to allow me to get over the cold that I caught) and then we kept visiting people.  On Tuesday, I got to see my former roommate Jen and her 3 youngin’s.  Then we spent the afternoon with my brothers and their significant others.  🙂  We took Spencer bowling, and he had a COMPLETE melt down.

Wednesday, we hung out with Grandma and then we went to see another former roommate, Sarah, and have dinner.  It was so good to see her house and her cute nursery for her bun in the oven.

Thursday, we had dinner with Adam’s oldest brother’s family AND the sister’s family we stayed with in Idaho.  Spencer absolutely adores his cousins and we are so glad he could spend time with them.

We were ready to come home on Saturday when we finally made it home.  We had a great trip and were really glad everyone still wanted to see us even though we were sick.  🙂