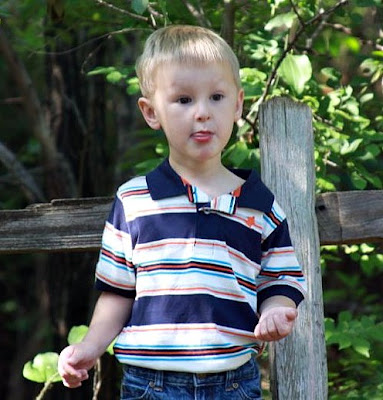 This is Spencer. He is 3 (and a few months more than a half) years old. He loves to play with his dad, play with legos, watch Curious George, love on his brother and just be a little (okay, a lot) silly. He also has Asperger’s Syndrome (or High Functioning Autism).

Let me tell you a little bit about Aspergers Syndrome. Aspergers is part of the Autism spectrum, and due to recent changes to the Autism spectrum it is now just lumped in with High Functioning Autism. What makes Aspergers Syndrome (AS)/High Functioning Autism (HFA) different than classic Autism is mostly the language skills. People with AS/HFA have no lack of development in language, but they do have other typically autistic symptoms.

We’ve found that Spencer has trouble with all these areas to one degree or another.

He has great language skills (which is not typical of classic Autism) and likes to chat about his most current obsession, which happens to be robots or Curious George. He will answer questions, if prompted to do so. He may not if you just asked him. Often we’ll have to tell him to please answer our questions.

Spencer always means well, but he doesn’t understand how to communicate his emotions and sometimes they come out more aggressively than he really intends. We’ve been working on this, but sometimes it doesn’t always work.

He thrives well under a very consistent routine. We’ve haven’t been great at this, but there are things we have to do the same way everyday. It causes him a great deal of stress to have his routines changed. We worry about him when it comes time to start school, but we are doing everything we can to help him make a smoother transition.

Spencer is also bothered by loud, sudden noises, even when his brother starts crying. He can be easily over stimulated in a large room like a gym that sound echoes off the walls. When this happens, we’ve found it best to try to take him out of the room let him go some place a little quieter to relax a bit and then try to bring him back to the group. Doesn’t always work, but we have to try.

Spencer is SUCH a sweetheart, and a great kid to be around. We love him every much, and want to record his (and our) journey through his alien planet.

2 thoughts on “Living with an Aspie: Meet My Aspie”