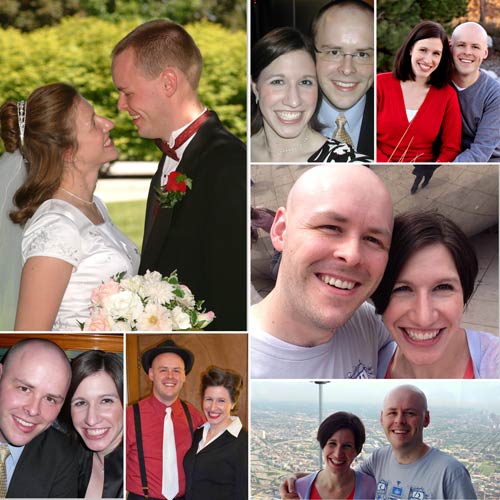 Adam and I recently celebrated our 10th Anniversary.  It doesn’t seem like we’ve been married for that long, but we really have.  Adam wrote some very sweet things about it on Facebook, and I wanted to put them here too.

But first, here is us through the years.  We apparently we have to take pictures of ourselves often.  So, there are lots of selfies.

Here is what Adam had to say about it. I love the way he writes.

Since I already said the words “Happy Anniversary!” to Jessica on this, our 10th wedding anniversary, I thought I’d instead use this space to tell you about something important to me. It could have been different.

We could have never gone on a first date. I asked her out during one of our ward’s trips to the sand dunes. If she had said no, I probably would have given up. I was not (and am not) the persistent type. But she said yes.

We could have never started dating exclusively. Even after our first date, I did go on a few other dates before we started “going out”. None of them panned out nearly as well, though. When the time came to make it more serious (as told last fall in one of my status updates), I got up the courage to talk to her about it, but I was very nervous about what would happen and how excited she would be about the idea. If she had said no or been lackluster, I might have given up. But she said yes.

We could have never become engaged. I don’t think, after our mostly blissful dating period, that I could have ever NOT asked Jessica to marry me. Still, at times we had our doubts and spoke together about them. They seemed very serious at the time and could have become major stumbling blocks in our relationship. By the time I popped the question, I don’t think there was any possibility she could have said no. We had, time after time, said “yes!” by rejecting those doubts. So, on Valentine’s Day 2004 (I know, I know, Valentine’s Day), she very enthusiastically said yes.

We could have never married. Just kidding. When we got engaged and jumped on that marriage-train, there was no stopping it. We went full bore all the way until we both said yes at the altar like it was the most natural thing in the world.

Then marriage happened. We could have let it fall apart in a dozen different ways over the past ten years. Compared to some, our tests and trials were probably not huge, but they were to us. Time after time, we were faced with the decision to draw together or pull apart. Perhaps we haven’t been successful 100% of the time, but when the ultimate boiled-down questions became “Are you going to work to make this marriage successful?” we said yes and grew closer together because of it.

Today, it seems sort of strange to just celebrate the anniversary of our wedding because, practically, it is such a small part of what our marriage _is_. So, I am celebrating ALL the times we “said yes” and all the ways we are committed to each other. I love you so much, sweetie, and I’m excited to face the rest of our lives hand-in-hand.