It seems as though we’ve entered a into a holding pattern as we get closer to baby’s due date.  I’m getting slower and slower moving, and Spencer seems to be getting a lot faster everyday to boot.  It’s gotten SO much more difficult to accomplish the tasks that always seem to be needing to get done.  So it’s been great having Adam around to help get everything done.  He’s really picked up all the slack I’ve had to leave.

About a week ago, we had the good fortune of having one of Adam’s sisters stop at our house overnight on their way home from Disney World.  It was a tight fit with all her family and our in our house, but it worked.  The Saturday before Adam and I work our tails off to get the house the way I would want it to have guests in it, and it is SO clean.  I’ve been trying to keep it that way so we don’t have nearly so much to do when baby comes.  It’s been a huge stress relief to have it so tidy the majority of the time.

I’ve also noticed that I’ve already gone into the prep for baby phase for myself.  I’ve got a facial scheduled, pedicures, a hair cut, and I’ve colored my hair (I’ll have to do it again before, but still).  I’m in the home stretch, but man I’ve got a long time left it seems.  Six weeks has never seemed quite so long before.  Adam and I were going over the calendar, and we have things going on almost every weekend until the baby is born.  I’m hoping he’s right, and it will go fast for us.

I’ve been taking monthly belly pictures with this pregnancy, and I have put together a collage of the ones I have thus far.  The spaces for the next ones I need are already there.  Here’s me and my big ole belly in all it’s glory.  Week 29 looks really big because I had the camera zoomed differently.  Learned my lesson.

Well, he did it.  He’s managed to fill his All-Done-With-Diapers jar and get his prize.  He may have had some help with a few supplements to the jar, but he did the work and is all done with diapers.  We figured out when we started (February 2) and we “finished” (he’s not completely independent yet, but we’ll get there WAY before new baby comes) on February 25.  So, it took him 23 days to really get the hang of it and WANT to give up his diapers. 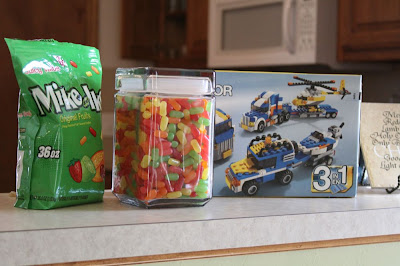 Saturday morning, he woke up and did his business and went about his normal morning routine.  About 15 minutes after coming out in the living room, he remembered he needed to do his Mike and Ikes!  We went over to do them, and he took a good look at the jar.  “It’s FULL!!  Look Momma, my jar is full!!”  He was so excited.  He knew exactly what that meant.  He got his big tuck legos, but being the mean mommy I am, I had a whole day already planned for him, and he had to wait for his legos.  (He didn’t mind in the end.) 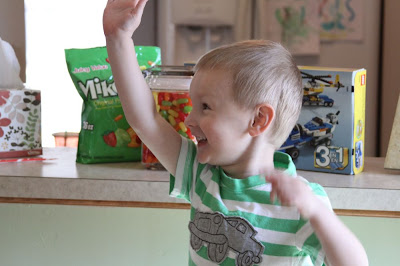 When Daddy got back from donating blood, we got dressed and went on our first outing to celebrate.  We went to Krispy Kreme and got him his first KK donut.  He wasn’t actually to crazy about the glazed one.  We also got a chocolate sprinkle one and a couple blueberry donuts for later.  He ended up REALLY liking the blueberry one and traded daddy his chocolate sprinkle for it.  That’s my boy!

Afterward, he got to go pick out some new big boy underwear.  He’s now the proud owner of Lego Star Wars undies.  The only lego undies you can get are either Batman or Star Wars.  We much prefer the Star Wars.  Once we bought the undies, we headed to the greatest store in the whole world as far as Spencer is concerned.  The Lego store.  He got to get a cup of Legos to add to his big blue bucket.  Awesome!

We went home for lunch where Daddy and he got to work on his truck legos until it was ready.  Spencer finished just about as fast as he could and went back to helping Daddy make his Legos.  He LOVES them.  I love the Creator sets since the build 3 different things with the same set. 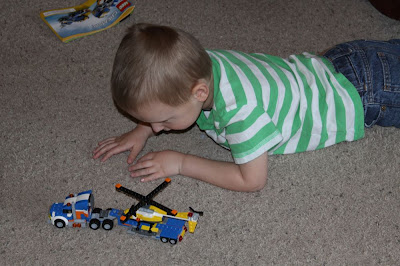 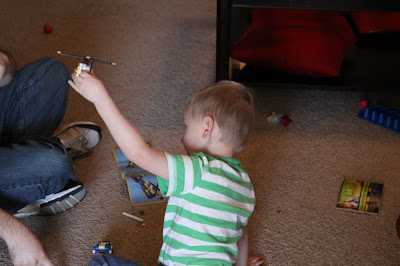 We played for a while and Adam and I took turns taking some naps.  It was Saturday afternoon after all.  When everyone was up went went over to Stars and Stripes Park by Lake Hefner and played.  It was crazy windy, and we came away with a great story about Spencer.

After playing for a while, he runs to up us and says, “I need to pee!”  So we hurry over to the pavilion where there were bathrooms to use, but it was all blocked off and under construction.  We tried to talk him into going on a tree, but he wasn’t having any of that.  WE then found a place where they had a porta potty that had a fence around it.

Adam and Spencer went in, and it was pretty nasty.  Even Spencer agreed.  “It’s too gross!”  So, we ended having him wizz on the wood fence by the porta-potty.  While he was finishing, I thought I heard someone coming so we hurried and whipped his pants up and ran outta there to finish zipping his pants.

About 10 minutes later, Spencer runs to Daddy and says I have to poop!  We pile in the car and drive down to the 7-11 on the corner (about a mile away) only to have him decide he didn’t need to, but needed to pee again.  🙂  Crazy boy.

We took him to McDonald’s for dinner since that seems to be his favorite place, especially when he can run around and play.  He had a great day, and we were sure glad to be able to celebrate with him.  He has even started going to be without a pull-up on.  I’m so excited for him and for us since we’ll be back in diapers again very soon just with a different child.  🙂

We found out on my birthday that we are having a…

We are so excited to be having another little boy, and it turns out that Spencer wasn’t right on when he predicted he’d be getting a sister.  We can hardly wait.  🙂

That’s right.  We are having another baby!! The baby is due around May 12th, 2012, and Spencer has been telling us that he is having a sister for a while now.  So, we assume he is hoping for a sister.  🙂  We don’t actually find out if it’s a boy or a girl until December 15 (ish).

Funny story about Spencer and the baby (already).  This is the conversation we had for a long time:

Mom: Spencer, are you going to have a sister or a brother?

Mom:  Oh really, are you going to have 2 sisters at the same time or different times?

Eventually, we’ve gotten him to tell us that they are coming at different times, but it was a little scary there for a second.  I’m excited to see if he’s right.  We don’t have a preference one way or the other, but we’re really excited.

My little boy is officially a big boy. Not just because of his new snazzy haircut, 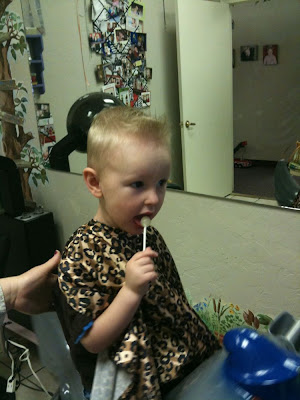 he’s a big boy because he decided that he wanted to start using the potty on Sunday. We have started potty training our son.

On Sunday, he would tell us that he had to pee, and the would go sit on the potty and do nothing, which we expected since we just started. Today though, about half the time he asked to potty he went. SWEET.

I’m so excited that this seems to be going well for him. I’m just trying to go with his lead on this one. He doesn’t really get pressure from me on this. It has been all him. Sometimes I do catch myself asking him if he needs to potty, but he doesn’t respond really well to that. Most of the time he just runs away from me.

Spencer and I just got back from the helmet clinic,  and…

We are so excited.  His measurements are the best they have been yet.  When we started, his head was measuring at 21.5 cm asymmetry.  In August, when we “got it off”, it had improved to 9.5 cm.  Unfortunately, it regressed to 12.5 cm.  So, back into the helmet we went for another month and a half.  As of today, his head is… drumroll… 4.6!! We couldn’t be happier!    Yea for Spencer!!  Here are some pictures to help you see the change he’s gone through (I’ll do a graduate photo study tonight)

Well, this is a new look, but not for the blog this time. Spencer got his band today. Here are some pictures of my little cutie and his new headgear.

And he was so tired this is how we found him when he got home.

We start off slow with him wearing the band for an increased amount of time each day for the first week until we get to where he is wearing it 23 hours a day. This should be an adventure. The time estimates for him to be in it is 3 to 4 months (things could change as we go through the process). So, just for the summer. 🙂

Well, Spencer has started smiling at us. It’s hard work, but totally worth it. We have even caught it on “film.” I did a scrapbook layout for it. It is so sweet getting that beautiful little guy to smile. He’s just too cute for his own good. Granted, I’m a little biased, but I don’t care. He’s just too cute. Here’s the layout I did, so you all can share for in the cuteness that is Spencer smiling.

It all happened unexpectedly, and I’m not being cliche-ish. Every single thing about this whole experience has been unexpected, good and bad. On Wednesday, November 5th, 2008 at 4:45am, I awoke to Jessica saying words not unlike “ADAM!!! Wake up!”. Naturally, I did because I’d been hoping for those words every day for the past week. She was a little excited because her water had broken (“ruptured” as the medical folk say). She had gotten up to go to the bathroom, felt a gushing sensation, and the rest you can guess. After we came to the realization we were going to have a baby that day, my next words, as you can expect, were “Want to go back to bed?”
END_OF_DOCUMENT_TOKEN_TO_BE_REPLACED

Well, Spencer Hintze Jeppson made his debut into the world on Wednesday, November 5th. He was born at 2:08 in the afternoon, weighing in at 7 lbs 10 ounces, and measuring 21 1/4 inches long.

The birth story will follow, but I’m tired tonight so it’ll have to wait. If you want to see more pictures of Spencer, and the events leading up to and after his birth just click here.